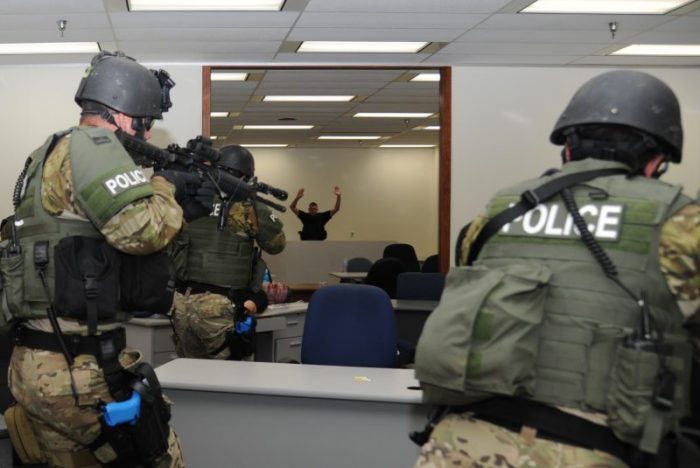 Today in Aberdeen, MD, a yet-to-be-identified suspect opened fire at a Rite Aid distribution center killing some and wounding others according to Sheriff Jeffery R. Gahler of Harford County.

The sheriff did not specify how many were killed in the incident, but some reports put the numbers at least three.

The only suspect appears to have acted alone and is in custody, but his/her identity has not been released at this time.

Some reports say the shooter is a 26-year-old woman who was a temporary employee of the distribution center, but this is not yet confirmed.

Watch a video of the situation here:

A 9mm Glock was used in the attack and the attacker had 2-3 extra magazines of ammunition on his/her person.

The Glock is reported to have been legally owned and registered to a woman who lives in Baltimore County.

The suspect is currently in critical condition, though, according to Sheriff Gahler:

“There were no shots fired by any of the law enforcement officers responding to the scene. We do not believe that there is an additional threat.”

In a tweet before the news conference Governor Larry Hogan said, “We are closely monitoring the horrific shooting in Aberdeen, our prayers are with all those impacted, including our first responders.”

4 adults with were taken to Johns Hopkins Bayview Medical center in Baltimore. The hospital’s trauma medical director, Dr. Raymond Fang, said some of the patients required surgery but did not elect to say if the shooter was among those his staff were treating, saying:

To us, they’re all patients.

At least one other injured person was taken to Christiana Hospital in Newark and listed in serious condition.

Mike Carre, an employee at Zenith Global Logistics, whose office is connected to the Rite Aid Distribution Center said several people who knew the woman described her, saying:

“ … she was nice person, but she came in in a bad mood [sic], she wanted to pick a fight. And then she started shooting.”

Response by agencies including the Harford Sheriff’s Department was quick and on scene within five minutes of the reported shooting.

Other agencies on scene included the F.B.I, DEA and the ATF.

This type of sad event is a reality of our times. What do you think of this situation?

Could an armed citizen have made a difference? Read this article by Jacob Paulsen to find out.