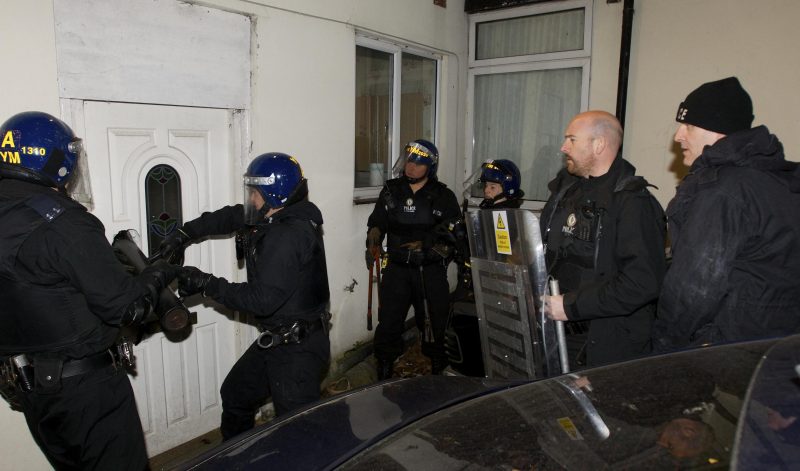 The officers of Prince George’s County Police (PGCP) were there to serve a drug related search warrant, but they had the wrong apartment.

The officers knocked on the front door announcing themselves. Hearing no response, they used a tool to pry the door open.

That’s when the unidentified home owner, who had been asleep in front of the TV with his daughter, opened fire with a shotgun.

One officer was shot in the hand and the other in the arm. Another officer shot back with one round but fortunately missed.

PGCP Chief Hank Stawinski said the resident surrendered immediately on learning the intruders were the police.

“The individual that we are targeting does not live at that address … a law-abiding, hard-working citizen of Prince George’s County and his daughter were home at the point where we were executing that search warrant.”

Watch a video of the situation:

The Chief went on to apologize for the error and say the PGCP have halted executing search warrants in order to review the departments procedures.

Both wounded officers were flown to University of Maryland Shock Trauma Center but PGCP spokeswoman Jennifer Donelan told reporters on Thursday that neither had life threatening injuries.

The officer who was wounded in the hand was released while the other is staying at the hospital for surgery to his arm.

No criminal charges will be filed against the father.

“The man acted to protect himself and his daughter through what he believed to be a threat of home invasion, it would be inappropriate to hold this gentleman criminally responsible for his actions.”

Serving a warrant at the wrong house is a bad situation for everyone involved. What do you think of this?

Leave us a comment below to let us know.